04/04/2013
“I’m happy with the outcome of the capital increase,” explained CEO Stefano Maullu. “This transaction has guaranteed the conditions needed to complete TEEM and thus a fundamental infrastructure improvement for the competitiveness of our region, which is the engine of Italy.”

The draft accounts as at 31 December 2012 and the company’s new shareholding structure were put to the Board of Tangenziale Esterna (TE) SpA this morning. TE is the company that has been granted the concession to build and then manage for 50 years the Milan Outer Eastern Bypass (TEEM), a project that has behind it €2 billion in project financing provided entirely by private investors.

TE is now into its fourth year and hasn’t received any money from the public purse, but it is sticking to the schedule of work, along with the general contractor (Consorzio Costruttori TEEM), and it has now streamlined its structure. On 12 September 2012, it approved increasing capital from €100 to €220 million and on 7 November 2012, it obtained a bridging loan worth €120 million from the arrangers (Banca IMI, Banca Popolare di Milano and Centrobanca-UBI). It has also put in place the conditions to close the project financing (€1.42 billion), hopefully also with the involvement of the European Investment Bank and Cassa Depositi e Prestiti.
The TEEM Bypass is a major infrastructure project that involves building 32 km of motorway and 38 km of new roads, and upgrading 15 km of existing roads and 30 km of cycle paths. By the time the World Expo is held in Milan in 2015, the Bypass will connect Agrate Brianza on the A4 motorway to Melegnano on the A1, crossing the provinces of Monza and Brianza, Milan and Lodi. In total, it will touch on 34 municipalities and help form the “Arco TEEM “, allowing the BreBeMi motorway to connect with the road network in the Greater Milan area.

The first item on the Board agenda was approval of the draft accounts for 2012, which will then need to be put to the soon-to-be called Shareholders’ Meeting before the end of April for the definitive green light.

The table below summarizes the subscription of the capital increase. 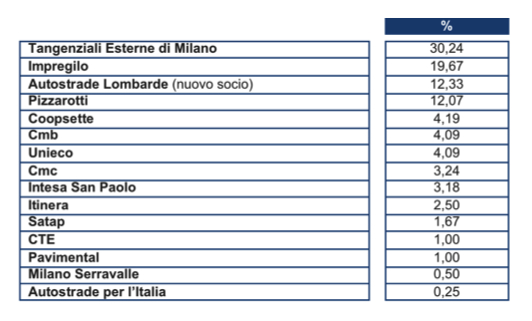 At its morning meeting, the Board also acknowledged the company’s new shareholding structure, which is the situation derived from the combination of the information in the table above and the option rights that were not exercised. The changed situation is summarized below: 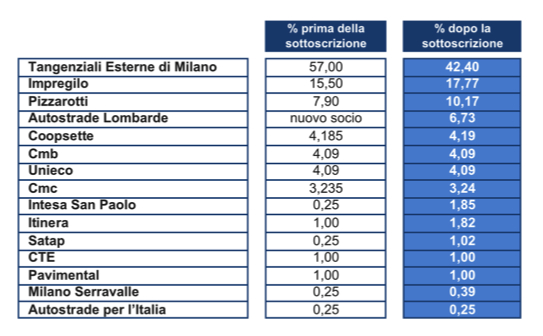 Autostrade Lombarde is currently building and will then manage the BreBeMi motorway and although its arrival on the scene might have altered the shareholding structure, it has not changed the target set by TE and the general contractor to complete TEEM in time for the 2015 World Expo in Milan. Indeed, the new shareholding structure confirmed its commitment to this goal, seeing the infrastructure work as a key boost in a time of economic crisis and a vital part of modernizing this section of public infrastructure that the EU itself has labelled as strategic. The plan remains to improve traffic flow, thus helping companies to become more competitive and improving quality of life, partly by generating jobs and stimulating growth.