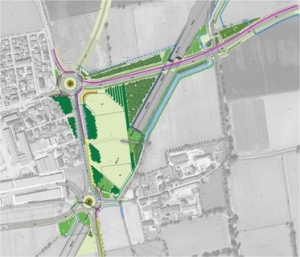 This project spans the territories of Mulazzano, Dresano and Casalmaiocco. The area principally consists of farmland, with the exception of the southern perimeter where the entrance to the TEEM tunnel corresponds to the fringes of built-up areas in Cologno and Dresano (Villaggio Ambrosiano). The landscape is typical of the irrigated plains around Milan, with intensive farming that dates back to initial land reclamation during the Middle Ages. The farmland, network of irrigation ditches, hedgerows and rows of trees are among the most highly-appreciated natural elements in the area. One of the most significant environmental resources here is an abundance of water. Well-known watercourses include the Vettabbia, the Ticinello and a number of active water troughs which make up an ecosystem of great environmental interest.

The Special Environmental Project focuses on two distinct areas, each in pursuit of different objectives. On the site parallel to Cavo Marocco, between the Virolo and Belpensiero farmsteads, a shift of the motorway route from the preliminary blueprint has made it possible to protect a long stretch of the Cavo’s current riverbed by building a protection strip between the edge of the motorway and existing riverbank vegetation.

Natural engineering is being deployed to reconnect the hydrographic grid and plant new woods to prevent the removal of additional high-quality farmland from the area.

On the second site, around the Cologno di Casalmaiocco tunnel, the project looks to reconnect the Villaggio Ambrosiano at Dresano to Cologno via the construction of an urban fringe park.

The project has deployed many types of newly-planted greenery in curving lines that mitigate direct views of road-related work while maintaining the visual relationship between the two settlements. This solution will pave the way for subsequent developments to convert the area from exclusive farmland use to publicly-accessible green space. 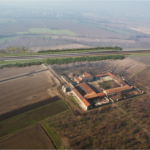 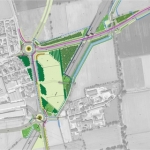